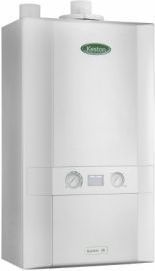 Our PlumbProud quality scoring system considers important factors like energy efficiency, the length of a manufacturer’s guarantee, likely running costs, and installed price to determine a boiler's value for money. This model has received 55.25% from our engineers.

You should budget around £2,200 for the supply and installation of this Keston System 30 System boiler by PlumbProud.

To receive a free quote on the Keston System 30 and to get professional guidance and advice on whether this Keston System 30 System boiler is the right choice for your home, please call us on 01604 343053, enter your postcode in the quote boxes on this page, or click here to email us.

Is the Keston System 30 boiler a combi, regular or a system boiler?

You may wish to consider installing the Keston System 30 if you are looking for a system boiler for your house or flat.

Like heat only boilers, system boilers need a hot water cylinder to work - they're normally installed inside an airing or landing cupboard. However, since system boilers do not require a separate cold water tank, they are popular with homeowners who are planning to convert their loft or where attic space is already at a premium.

They're able to distribute the hot water you need to taps and radiators through (often built-in) circulating pumps and, because there's no water tank to install, they're easier, quicker and cheaper to install than heat only boilers. To get the heat and hot water you need when you need it, just use the control panel to program the times and days you want.

Would the Keston System 30 system be a suitable boiler for my house or flat?

Whether this Keston System 30 System boiler is right for where you live depends on its size or what its "output" level is. Size does not mean its physical dimensions, however - it means how powerful it is.

The output of the Keston System 30 system is 30 kW, so which types of property would this model be appropriate for?

An experienced PlumbProud Gas Safe boiler installer would almost certainly recommend that this Keston System 30 System boiler would be most suitable for larger properties including detached homes with 15 or more radiators and two or more bathrooms.

Is the Keston System 30 a non-condensing or condensing boiler?

How environmentally friendly is the Keston System 30 system?

Do the available figures suggest that installing the Keston System 30 system in your property would be an environmentally friendly choice?

The Keston System 30 was awarded an efficiency rating of 89.5% with a SEDBUK grading of "TBC".

The Energy Related Products Directive (ERP) is European legislation that applies to all products which use or consume energy during their lifespan - this includes during the manufacturing process and when they're in use, right through to the point of final disposal.

The aim is to encourage manufacturers to create new products that are kinder to the environment and which create fewer harmful gas emissions.

The Keston System 30 has an ERP Heat rating of "A".

How long is the warranty offered by the manufacturer for the Keston System 30 boiler?

On the Keston System 30, the manufacturer offers a parts and labour warranty of 5 years.

We have rated this Keston System 30 System boiler at 55.25% using the PlumbProud quality scoring system. To determine a rating, we weigh up a number of important considerations including the energy efficiency, estimated running costs, manufacturer's warranty, price of the boiler and more.

This Keston System 30 System boiler will cost approximately £2,200 supplied and fully installed through PlumbProud assuming that there are no unexpected complications during the fitting.

For a free, no-obligation quotation on this Keston System 30 System boiler or for our professional advice on whether the Keston System 30 is suitable for your property, please call 01604 343053, click here to email our team or enter your postcode into the quotation box on this page.

If you’re looking for a system boiler for your house or flat, then the Keston System 30 is one you may wish to consider.

Is the Keston System 30 system boiler from the System range a suitable choice for my house or flat?

To most experienced Gas Safe boiler installers, the Keston System 30 system System would be most suitable for larger properties including detached homes with 15 or more radiators and two or more bathrooms.


What dimensions does a Keston System 30 have?

Is the Keston System 30 a non-condensing or condensing boiler?

How does the Keston System 30 system rate environmentally?

If you decide to install a Keston System 30 system in your home, will you be helping the environment with your choice? Let’s have a look at the figures.

The Keston System 30 was awarded an efficiency rating of 89.5% with a SEDBUK grading of "TBC".

In 2015, the Energy Related Products Directive (ERP) came into force. The legislation applies to all products that consume energy - in production, during their active life, and at the point of final disposal.

The ERP was introduced to incentivise manufacturers to create products that emit fewer harmful gases with the larger aim of protecting the wider environment.

The Keston System 30 has been awarded an ERP rating of "A".

What warranty does the Keston System 30 system boiler come with?

A parts and labour warranty of 5 years is included when you purchase the Keston System 30 boiler through PlumbProud.