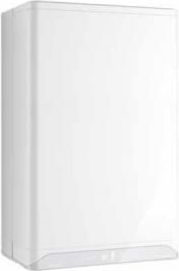 Our PlumbProud quality scoring system uses many different factors, such as price installed, manufacturer guarantees, energy efficiency and the likely cost of running, among others, to determine a boiler's value for money rating. This Intergas Xclusive 36 Combi boiler scores 83.71%.

This Intergas Xclusive 36 Combi boiler is likely to cost you £2,200 supplied and fully installed through PlumbProud, although there may be additional charges if the fit takes longer than anticipated. You will, however, receive a binding quote from us prior to starting work.

Is the Intergas Xclusive 36 a regular, combi or system boiler?

If you’re looking for a combi boiler for your house or flat, you may wish to the consider the Intergas Xclusive 36.

Is a Intergas Xclusive 36 combi boiler suitable for my apartment or house?

A PlumbProud Gas Safe engineer would recommend that the most suitable type of property for a Intergas Xclusive 36 combi would be smaller homes and apartments containing up to 10 radiators and providing hot water for one bathroom.


What are the dimensions of the Intergas Xclusive 36 boiler?

Is the Intergas Xclusive 36 non-condensing or condensing?

We recommend that you choose a condensing boiler wherever possible like the Intergas Xclusive 36 - try to go for the latest model, if possible, to take advantage of improving technology.

How does the Intergas Xclusive 36 combi rate environmentally?

Do the available figures suggest that installing the Intergas Xclusive 36 combi in your property would be an environmentally friendly choice?

After its assessment, the Intergas Xclusive 36 was given an efficiency rating of 92% and a SEDBUK grading of "A".

ERP ratings of "A" for heat and "A" for water were assigned when testing the Intergas Xclusive 36.

What is the warranty period for the Intergas Xclusive 36?

The Intergas Xclusive 36 is supplied with a parts and labour warranty of 10 years.

On the PlumbProud quality scoring system, we rate this Intergas Xclusive 36 Combi boiler 83.71%. To determine our rating, we take lots of different factors into consideration from price installed to manufacturer guarantees, energy efficiency, likely cost of running, and more.

This Intergas Xclusive 36 Combi boiler will cost approximately £2,200 supplied and fully installed through PlumbProud assuming that there are no unexpected complications during the fitting.

Please enter your postcode in the quote boxes on this page, email us, or call us on 01604 343053 to get a free quote and guidance on whether the Intergas Xclusive 36 boiler is the right choice for your home.

Is the Intergas Xclusive 36 a combi, system or regular boiler?

The Intergas Xclusive 36 is a gas combi boiler.

Is a Intergas Xclusive 36 combi boiler right for my house or apartment?

An experienced heating engineer would say that this Intergas Xclusive 36 Combi boiler's level of output makes it a suitable installation for smaller homes and apartments with up to 10 radiators and one bathroom.


Making space for the Intergas Xclusive 36

Is the Intergas Xclusive 36 condensing or non-condensing?

We recommend that, if possible, you choose a condensing boiler like the Intergas Xclusive 36.

Is the Intergas Xclusive 36 combi boiler rated as environmentally friendly?

Let's take a closer look at whether installing a Intergas Xclusive 36 combi would be a good choice for the environment.

The Intergas Xclusive 36 has been assigned an efficiency rating of 92% with a SEDBUK rating of "A".

The Intergas Xclusive 36 scores "A" for heat and "A" for water.

Does a Intergas Xclusive 36 combi boiler come with a warranty period?

You receive a parts and labour warranty of 10 years with the Intergas Xclusive 36 boiler.