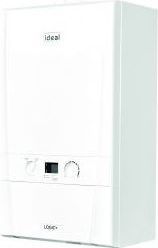 Based on a wide-ranging set of important factors including the cost to install the boiler, its energy efficiency rating, running costs, and so on, this Ideal Logic+ H30 heat only boiler receives a score of 82.03% on our PlumbProud quality scoring system.

You should budget around £2,100 for the supply and installation of this Ideal Logic+ H30 heat only boiler by PlumbProud.

To contact us, please enter your postcode in the quote boxes on this page, click here to email us, or give us a call on 01604 343053. We can provide you with a free quote on the Ideal Logic+ H30 boiler and offer professional advice and guidance on whether this Ideal Logic+ H30 heat only boiler is the right choice for your home.

The Ideal Logic+ H30 is a heat only boiler you may wish to consider if you want this particular type of boiler for your house or flat.

The major advantage of a heat only boiler compared to the more contemporary combi boiler is that it’s possible to run more than one appliance requiring hot water at the same time. With a combi boiler, switching two hot water taps on at the same time will lead to a drop in water pressure, temperature and volume to both points.

Best suited for larger homes, you can program hot water and central heating for times and days that suit you and your family. However, if you forget to set the timer and your hot water cylinder is empty, then you may have to wait up to an hour before you run a bath.

Would the Ideal Logic+ H30 heat only boiler be suitable for my house or flat?

Whether this Ideal Logic+ H30 heat only boiler is right for where you live depends on its size or "output" level. Size does not mean its physical dimensions - it means how powerful it is.

Most heating engineers would recommend that this Ideal Logic+ H30 heat only boiler would be suitable for larger properties including detached homes with 15 or more radiators and two or more bathrooms.

Is the Ideal Logic+ H30 condensing or non-condensing?

We recommend that, if possible, you select one of the very latest condensing gas boilers on the market like the Ideal Logic+ H30.

How does the Ideal Logic+ H30 heat only rate environmentally?

Would choosing the Ideal Logic+ H30 heat only boiler be an environmentally friendly decision? Here's what the figures say.

After its assessment, the Ideal Logic+ H30 was given an efficiency rating of 93% and a SEDBUK grading of "A".

What is the warranty period for the Ideal Logic+ H30?

The parts and labour warranty on the Ideal Logic+ H30 covers all repair-related costs for 7 years while the heat exchange warranty covers you for [Heat Exchange Warranty] years.

Using the PlumbProud boiler quality scoring system, we have rated this model at 82.03%. To determine the rating, we factor in the price installed, energy efficiency, running costs, the warranty offered, and more.

We estimate that this Ideal Logic+ H30 heat only boiler will cost £2,100 fully installed through PlumbProud provided that the fit is straightforward.

Please enter your postcode in the quote boxes on this page, email us, or call us on 01604 343053 to get a free quote and guidance on whether the Ideal Logic+ H30 boiler is the right choice for your home.

The Ideal Logic+ H30 boiler could be suitable for your house or flat if you are looking for a new heat only boiler.

Heat only boilers are sometimes called standard boilers, regular boilers or conventional boilers but they are actually the same thing. For a heat only boiler, you'll need to find space for both a cold-water tank and an immersion hot water cylinder - most households choose the attic for the former and a landing cupboard or airing cupboard for the latter. The immersion cylinder is the part of the system that keeps your hot water warm.

A regular boiler is the most suitable choice if you have a larger family or if there is more than one bathroom in your home - the more popular combi boilers do not work well in homes where there is high and often simultaneous demand for hot water.

Is a Ideal Logic+ H30 heat only a suitable choice for my house or flat?

A Gas Safe engineer would recommend that the Ideal Logic+ H30 heat only boiler would be an ideal installation option for larger properties including detached homes with 15 or more radiators and two or more bathrooms.

Is the Ideal Logic+ H30 condensing or non-condensing?

We strongly recommend that you choose a condensing boiler like the Ideal Logic+ H30 - the technology is improving every year so the newer the boiler, the better.

Is the Ideal Logic+ H30 heat only a good choice for the environment?

Would installing a Ideal Logic+ H30 heat only boiler in your home help combat climate change? What do the figures suggest?

Following its assessment, the Ideal Logic+ H30 was given an efficiency rating of 93% and a SEDBUK grading of "A".

Will I be covered if the Ideal Logic+ H30 heat only breaks down?

The parts and labour warranty on the Ideal Logic+ H30 lasts for 7 years.