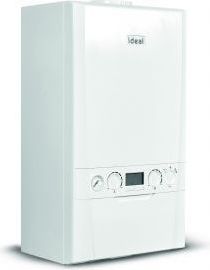 Fitted by an experienced Gas Safe PlumbProud engineer, the cost for this Ideal Logic+ C35 Combi boiler will be in the region of £2,000 on a standard, non-complicated installation.

Get a free, no-obligation Ideal Logic+ C35 boiler quote today by simply entering your postcode in the box on this page. You can also speak to a boiler installation expert about heating for your home by getting in touch via email or by phone on 01604 343053.

The Ideal Logic+ C35 may be worth considering if you are looking for a combi boiler for your house or flat.

Is the Ideal Logic+ C35 combi boiler the right choice for my house or apartment?

The output of the Ideal Logic+ C35 combi is 35.3 kW kilowatts, so which types of property would this be appropriate for?

A PlumbProud Gas Safe boiler installer would recommend that the most suitable type of property for this Ideal Logic+ C35 Combi boiler would be larger properties including detached homes containing 15 or more radiators and two or more bathrooms.

The flow rate indicates the maximum volume of hot water (measured in litres per minute) that your boiler can distribute at any given time. This means that if you and your family are likely to be using several taps and showers simultaneously or you have a lot of radiators, you need a boiler with a high flow rate. This Ideal Logic+ C35 Combi boiler's flow rate is 15 L/m.

As with all combi boilers, the Ideal Logic+ C35 is only able to heat and distribute water at the rate at which it actually enters your property.


What are the proportions of a Ideal Logic+ C35 boiler?

Is the Ideal Logic+ C35 a condensing or non-condensing boiler?

The Ideal Logic+ C35 is a condensing gas boiler - in fact, we recommend that you select this model or one of the latest condensing boilers on the market as the technology continues to improve over time.

How energy efficient is the Ideal Logic+ C35 combi?

Would the environmental impact of installing a Ideal Logic+ C35 combi in your home be positive? Let's look at the numbers.

Following official testing, the Ideal Logic+ C35 was given an efficiency rating of 94% with a SEDBUK rating of "A".

If the Ideal Logic+ C35 breaks down, will I be covered by the warranty?

Parts and labour charges incurred for repairs made to your new Ideal Logic+ C35 are covered by a 7 year warranty.

Using the PlumbProud boiler quality scoring system, we have rated this model at 82.57%. To determine the rating, we factor in the price installed, energy efficiency, running costs, the warranty offered, and more.

On a standard fit, we would expect this Ideal Logic+ C35 Combi boiler to cost you £2,000 supplied and fully installed by an experienced Gas Safe PlumbProud fitter.

Enter your postcode in the box provided and receive a free quote for the Ideal Logic+ C35 boiler for your home. We are also happy to answer any questions you might have about any of our boilers. You can do this by emailing the team or calling us today on 01604 343053.

Is the Ideal Logic+ C35 a system boiler, a combi boiler or a regular boiler?

If you are considering installing a combi boiler in your house or flat, then the Ideal Logic+ C35 boiler is certainly worth investigating.

Should I choose a Ideal Logic+ C35 combi boiler for my house or flat?

An experienced Gas Safe boiler installer would recommend that this Ideal Logic+ C35 Combi boiler would be a suitable installation choice for larger properties including detached homes with 15 or more radiators and two or more bathrooms.

The speed at which it can do this is called the "flow rate", which is measured in litres per minute. If you have a lot of radiators and bathrooms in your home and multiple people are regularly trying to use the hot water at one time, such as in the morning or evening, you'll need a combi with a high flow rate. This Ideal Logic+ C35 Combi boiler's flow rate is 15 L/m.


What are the proportions of a Ideal Logic+ C35 boiler?

Is the Ideal Logic+ C35 non-condensing or condensing?

Is the Ideal Logic+ C35 combi boiler good for the environment?

Do the figures suggest that installing the Ideal Logic+ C35 combi at your property would help in the fight against climate change?

The ratings awarded to the Ideal Logic+ C35 are 94% with a SEDBUK rating of "A".

In the case of the Ideal Logic+ C35, the ERP rating is "A" for heat and "A" for hot water production.

Is there a warranty on the Ideal Logic+ C35 combi boiler if it breaks down?

The Ideal Logic+ C35 boiler comes with a parts and labour warranty of 7 years.