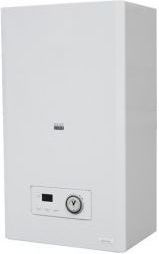 We have determined a rating of 83.64% for this Heatline Capriz2 24kW Combi boiler on the PlumbProud quality scoring system. The rating is determined using a variety of important factors including price installed, manufacturer guarantees, energy efficiency and the likely cost of running.

On straightforward installations, we would expect to charge you £1,500 for this Heatline Capriz2 24kW Combi boiler fully installed.

Is the Heatline Capriz2 24kW boiler a standard, combi or system model?

Looking for a gas combi boiler for your house or flat? If you are, the Heatline Capriz2 24kW boiler may be worth considering.

Is a Heatline Capriz2 24kW combi boiler suitable for my apartment or house?

Which types of property would this Heatline Capriz2 24kW Combi boiler be appropriate for given its output of 24 kW?

Most experienced boiler engineers would recommend this Heatline Capriz2 24kW Combi boiler as a suitable option for smaller homes and apartments with no more than up to 10 radiators and one bathroom.

With all combi boilers, the "flow rate" (measured in litres per minute) is as important a consideration as output rate when choosing which model to go for. This Heatline Capriz2 24kW Combi boiler's flow rate is 10 L/m.

Like all combi boilers, the Heatline Capriz2 24kW draws water from the mains. It instantly heats that water and then distributes it to the parts of your home which need it - taps, radiators, bathrooms, and so on.

Is the Heatline Capriz2 24kW condensing or non-condensing?

The Heatline Capriz2 24kW boiler is a condensing gas boiler and we recommend that you select one of the latest models if possible.

Does the Heatline Capriz2 24kW combi protect the environment?

Would choosing a Heatline Capriz2 24kW combi help in the fight against climate change? What do the performance statistics suggest?

The energy efficiency of the Heatline Capriz2 24kW was rated at 89.3% with a SEDBUK grading of "A".

The Energy Related Products Directive (ERP) was introduced in 2015 and it applies to all products that consume energy throughout their lifetime, including during the manufacturing process and at the point of final disposal.

The Heatline Capriz2 24kW has an ERP rating of "A" for heat and "A" for hot water production.

Does a Heatline Capriz2 24kW combi boiler come with a warranty period?

The Heatline Capriz2 24kW boiler has a warranty covering parts and labour costs for up to 2 years after installation.

We score this Heatline Capriz2 24kW Combi boiler as 83.64% on the PlumbProud quality scoring system. Our rating is based on various factors, including the installation price, the length of the manufacturer's warranty, and the expected energy efficiency and operating costs.

On most non-complicated installations, we would expect this Heatline Capriz2 24kW Combi boiler to cost £1,500 including installation if you choose PlumbProud to do the work.

Please enter your postcode in the quote boxes on this page, email us, or call us on 01604 343053 to get a free quote and guidance on whether the Heatline Capriz2 24kW boiler is the right choice for your home.

What type of boiler is Heatline’s Capriz2 24kW - system, regular or combi?

Looking for a gas combi boiler for your flat or house? Then the Heatline Capriz2 24kW may be an option you should consider.

Is the Heatline Capriz2 24kW combi suitable for my house or flat?

Most experienced heating engineers would likely recommend that, at this level of output, this Heatline Capriz2 24kW Combi boiler would be a suitable choice for smaller homes and apartments with up to 10 radiators and one bathroom.


What is the size of the Heatline Capriz2 24kW?

Is the Heatline Capriz2 24kW a condensing or non-condensing boiler?

The Heatline Capriz2 24kW is a condensing boiler – we recommend to all clients that they choose the very latest condensing boilers because their efficiency continues to improve year after year.

How environmentally friendly is the Heatline Capriz2 24kW combi?

Will choosing to install a Heatline Capriz2 24kW combi in your home help the environment? Let's review the figures.

The Heatline Capriz2 24kW has been given a rating of 89.3% for energy efficiency, equivalent to a SEDBUK "A" rating.

The ERP rating for the Heatline Capriz2 24kW is "A" for heat and "A" for hot water production.

Will I be covered if the Heatline Capriz2 24kW combi breaks down?

The Heatline Capriz2 24kW boiler is covered by a parts and labour warranty of 2 years.