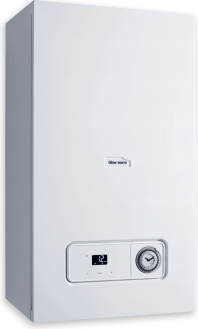 We score each boiler we sell by considering a number of different factors including price installed, manufacturer guarantees, energy efficiency, the likely cost of running, and more. For this Glow worm Essential 24 Combi boiler, we have awarded a rating of 71.05%.

On most non-complicated installations, we would expect this Glow worm Essential 24 Combi boiler to cost £2,900 including installation if you choose PlumbProud to do the work.

If you would like a free quote and professional advice and guidance to help you decide if the Glow Worm Essential 24 is the right choice for your home, please get in touch. You can do this by entering your postcode in the quote boxes on this page, click here to email us or give us a call on 01604 343053.

Is the Glow Worm Essential 24 a regular, combi or system boiler?

The Glow Worm Essential 24 is an option you may wish to consider if you’re looking for a combi boiler for your house or flat.

Is a Glow Worm Essential 24 combi the right boiler for my house or flat?


What size is the Glow Worm Essential 24 boiler?

Is the Glow Worm Essential 24 a non-condensing or condensing boiler?

The Glow Worm Essential 24 is a condensing gas boiler - where possible, we always recommend to clients that they choose one of the very latest condensing boilers to take advantage of this technology, which improves year after year.

Would choosing the Glow Worm Essential 24 combi boiler be an environmentally friendly decision? Here's what the figures say.

The Glow Worm Essential 24 scored an efficiency rating of 89.3% and a SEDBUK band rating of B.

What is the warranty period for the Glow Worm Essential 24?

The Glow Worm Essential 24 boiler comes with a parts and labour warranty of 3 years.

We have determined a rating of 71.05% for this Glow worm Essential 24 Combi boiler using the PlumbProud quality benchmarking system. Factors used to score a boiler include its energy performance, how much it costs to run, the installation price, and how long the manufacturer's guarantee lasts.

Provided the proposed installation is straightforward, we would anticipate that this Glow worm Essential 24 Combi boiler will cost £2,900 fully installed through PlumbProud.

If you would like to get in touch with us for a free quote and professional guidance and advice on whether the Glow Worm Essential 24 is the right choice for your home, you can do so by entering your postcode in the quote boxes on this page, calling us on 01604 343053 or you can click here to email us.

Is the Glow Worm Essential 24 a regular, combi or system boiler?

You may wish to consider installing the Glow Worm Essential 24 if you are looking for a combi boiler for your house or flat.

Is the Glow Worm Essential 24 combi boiler suitable for my house or apartment?

A PlumbProud boiler engineer would recommend that this Glow worm Essential 24 Combi boiler is suitable for smaller homes and apartments with up to 10 radiators and one bathroom.

As an indication, a power shower needs about 10 litres of water per minute, whereas the flow rate of this Glow worm Essential 24 Combi boiler is 12 L/ml/m.


How large is a Glow Worm Essential 24 boiler?

Is the Glow Worm Essential 24 a non-condensing or condensing boiler?

The Glow Worm Essential 24 is a condensing gas boiler - we strongly suggest that you choose either this model or a recently released model if at all possible.

Is the Glow Worm Essential 24 combi good for the environment?

Would choosing the Glow Worm Essential 24 combi be an environmentally-friendly choice? If so, let's look at its performance figures.

The ratings awarded to the Glow Worm Essential 24 are 89.3% with a SEDBUK rating of "B".

How long is the warranty offered by the manufacturer for the Glow Worm Essential 24 boiler?

The parts and labour warranty on the Glow Worm Essential 24 covers all repair-related costs for 3 years while the heat exchange warranty covers you for [Heat Exchange Warranty] years.