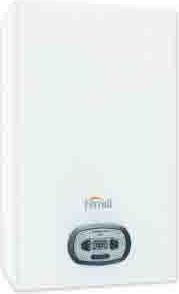 We have rated this Ferroli Bluehelix 18S System boiler at 91.17% using the PlumbProud quality scoring system. To determine a rating, we weigh up a number of important considerations including the energy efficiency, estimated running costs, manufacturer's warranty, price of the boiler and more.

This Ferroli Bluehelix 18S System boiler is likely to cost you £1,600 supplied and fully installed through PlumbProud, although there may be additional charges if the fit takes longer than anticipated. You will, however, receive a binding quote from us prior to starting work.

Get a free, no-obligation Ferroli Bluehelix 18S boiler quote today by simply entering your postcode in the box on this page. You can also speak to a boiler installation expert about heating for your home by getting in touch via email or by phone on 01604 343053.

Is the Ferroli Bluehelix 18S boiler a combi, regular or a system boiler?

The Ferroli Bluehelix 18S is a system boiler you may wish to consider if you want this type of boiler for your house or flat.

As with a heat only boiler, a system boiler requires the installation of a hot water cylinder but they do not need a cold water tank to work. This makes them suitable choices for homeowners planning a loft conversion or for properties without a loft or very limited attic space.

A system boiler can supply multiple taps and showers simultaneously and is suitable for both large families and properties with more than one bathroom - combi boilers struggle to do this.

Is the Ferroli Bluehelix 18S system boiler suitable for my house or apartment?

Whether this Ferroli Bluehelix 18S System boiler is right for where you live depends on its size or what its "output" level is. Size does not mean its physical dimensions, however - it means how powerful it is.

The output of the Ferroli Bluehelix 18S system is 18 kW, so which types of property would this model be appropriate for?

An experienced boiler engineer would recommend that this Ferroli Bluehelix 18S System boiler would be a suitable installation choice for smaller homes and apartments with up to 10 radiators and one bathroom.


How large is the Ferroli Bluehelix 18S?

Is this Ferroli boiler condensing or non-condensing?

We strongly recommend that you choose a condensing boiler like the Ferroli Bluehelix 18S - the technology is improving every year so the newer the boiler, the better.

If you decide to install a Ferroli Bluehelix 18S system in your home, will you be helping the environment with your choice? Let’s have a look at the figures.

Following official testing, the Ferroli Bluehelix 18S was given an efficiency rating of 94% with a SEDBUK rating of "A".

The Ferroli Bluehelix 18S has an ERP rating of "A" for heat and "A" for hot water.

Does a Ferroli Bluehelix 18S system boiler come with a warranty period?

On the PlumbProud quality scoring system, we rate this Ferroli Bluehelix 18S System boiler 91.17%. To determine our rating, we take lots of different factors into consideration from price installed to manufacturer guarantees, energy efficiency, likely cost of running, and more.

You should budget around £1,600 for the supply and installation of this Ferroli Bluehelix 18S System boiler by PlumbProud.

To get a free quote for the installation of the Ferroli Bluehelix 18S boiler in your home, simply enter your postcode in the box provided on this page. You can also find out whether this is the right boiler for your home by clicking to email our installation team or by calling us on 01604 343053.

Is this Ferroli Bluehelix 18S boiler a combi, system or regular boiler?

The Ferroli Bluehelix 18S may be worth considering if you are looking for a system boiler for your house or flat.

System boilers are very popular for properties with limited or no loft space or when homeowners want to keep the space for a loft conversion. This is because, unlike heat only boilers, they don’t require a cold-water tank - however, system boilers do need a hot water cylinder (often installed in an airing or landing cupboard).

Instead of the traditional cold-water tanks, system boilers use their built-in circulating pumps to heat the water needed for your taps and radiators. This also makes them an easier choice for engineers to install as there is one less large component to find space for and fit.

Like a regular boiler, you need to use a control panel to control a system boiler. Set the times when you want central heating and hot water to be available, such as in the morning when there might be greater demand for showers, and it will be there. Although hot water is not available on-demand like with a combi boiler, once the water has been heated it will stay in the hot water cylinder until it’s used up.

Should I install a Ferroli Bluehelix 18S system boiler in my house or apartment?


What are the dimensions of the Ferroli Bluehelix 18S boiler?

The Ferroli Bluehelix 18S is a condensing gas boiler - in fact, we recommend that you select this model or one of the latest condensing boilers on the market as the technology continues to improve over time.

Will installing a Ferroli Bluehelix 18S system in your home be a positive contribution to the environment? The figures below will tell you more.

The Ferroli Bluehelix 18S has been assigned an efficiency rating of 94% with a SEDBUK rating of "A".

The ERP rating for the Ferroli Bluehelix 18S is "A" for heat and "A" for hot water production.

If the Ferroli Bluehelix 18S breaks down, will I be covered by the warranty?

The Ferroli Bluehelix 18S boiler is provided with a parts and labour warranty lasting 10 years.