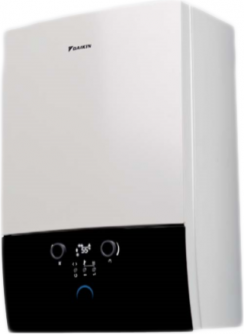 Using the PlumbProud boiler quality scoring system, we have rated this model at TBC%. To determine the rating, we factor in the price installed, energy efficiency, running costs, the warranty offered, and more.

We estimate that this Daikin D2CND 24 Combi boiler will cost £TBC fully installed through PlumbProud provided that the fit is straightforward.

For a free, no-obligation quotation on this Daikin D2CND 24 Combi boiler or for our professional advice on whether the Daikin D2CND 24 is suitable for your property, please call 01604 343053, click here to email our team or enter your postcode into the quotation box on this page.

Is the Daikin D2CND 24 a combi, system or regular boiler?

You may wish to consider installing the Daikin D2CND 24 if you are looking for a combi boiler for your house or flat.

Combi boilers were introduced by manufacturers in the 1970s to offer British homeowners a way to cheaply and reliably heat their homes and have hot water without taking up too much space. Previously, most boilers had one or more storage tanks, which either heated water and kept it warm or held water to be heated later.

With combi boilers, there is no need to find space for large tanks around your home as the hot water needed for your radiators and taps is available on demand. Combi boilers do this by drawing water from your mains supply, heating it instantly whenever you need it and then distributing it to where it's needed in the home.

The major disadvantage to combi boilers is that they have a maximum capacity for heating water. In a larger household, water pressure, volume and temperature will drop if two or more people are trying to use hot water at the same time.

Should I install a Daikin D2CND 24 combi boiler in my house or flat?

The Daikin D2CND 24 combi boiler has an output of 24 kW, so which types of property would it be most appropriate for?

A boiler engineer would recommend that, at this level of output, the most suitable type of property for this Daikin D2CND 24 Combi boiler would be smaller homes and apartments with up to 10 radiators and one bathroom.

When choosing a combi boiler for your home, you need to think about "flow rates" as well as output rates. This Daikin D2CND 24 Combi boiler's flow rate is 12 L/m.

This indicates the maximum volume of hot water (measured in litres per minute) that your boiler can heat then distribute to your taps, showers and radiators at any one time. The greater the demand for hot water in your home, the higher the flow rate you will require.

However, all combi boilers like the Daikin D2CND 24 draw water directly from the mains and heat it instantly.

This means that they can only heat and distribute water at the rate it enters the property (the "mains pressure" rate). For example, if your mains pressure is 11 litres per minute, this will be the highest flow rate you can achieve even if your boiler's flow rate is 17l/m.


What size is the Daikin D2CND 24 boiler?

Is the Daikin D2CND 24 non-condensing or condensing?

The Daikin D2CND 24 is a condensing gas boiler - we strongly suggest that you choose either this model or a recently released model if at all possible.

Is the Daikin D2CND 24 combi boiler an environmentally friendly choice?

Is the Daikin D2CND 24 combi an environmentally friendly choice for your home? Let’s have a look at the figures.

The Daikin D2CND 24 was awarded an efficiency rating of 93% with a SEDBUK grading of "A".

Is there a warranty on the Daikin D2CND 24 combi boiler if it breaks down?

The Daikin D2CND 24 boiler is covered by a parts and labour warranty of 2 years.

On the PlumbProud boiler quality benchmark scoring system, we have rated this Daikin D2CND 24 Combi boiler at TBC%. Ratings are determined by considering a number of important factors including the energy efficiency, price installed, warranty length, and running costs of the boiler.

On most non-complicated installations, we would expect this Daikin D2CND 24 Combi boiler to cost £TBC supplied and fully professionally installed.

For a free quote on the Daikin D2CND 24 boiler and to get professional advice and guidance on whether it is the right choice for your home, please enter your postcode in the quote boxes on this page, click here to email us, or call us on 01604 343053.

Is the Daikin D2CND 24 a standard, combi or system boiler?

If you are considering installing a combi boiler in your house or flat, then the Daikin D2CND 24 boiler is certainly worth investigating.

Is a Daikin D2CND 24 combi a suitable choice for my house or flat?

Whether this Daikin D2CND 24 Combi boiler is right for where you live depends on its size or what its "output" level is. Size does not mean its physical dimensions, however - it means how powerful it is.

The output of the Daikin D2CND 24 combi is 24 kW, so which types of property would this model be appropriate for?

A PlumbProud Gas Safe boiler installer would recommend that this Daikin D2CND 24 Combi boiler be installed in smaller homes and apartments with one bathroom and up to 10 radiators.

With all combi boilers, the "flow rate" (measured in litres per minute) is as important a consideration as output rate when choosing which model to go for. This Daikin D2CND 24 Combi boiler's flow rate is 12 L/m.

Like all combi boilers, the Daikin D2CND 24 draws water from the mains. It instantly heats that water and then distributes it to the parts of your home which need it - taps, radiators, bathrooms, and so on.

Is the Daikin D2CND 24 a non-condensing or condensing boiler?

Condensing gas boilers like the Daikin D2CND 24 are environmentally friendlier and cheaper to run so, if possible, we strongly recommend that you choose this or one of the very latest models.

Is the Daikin D2CND 24 combi an environmentally friendly boiler?

Will choosing to install a Daikin D2CND 24 combi in your home help the environment? Let's review the figures.

How many years' warranty does the Daikin D2CND 24 combi come with?

The Daikin D2CND 24 boiler is covered by a parts and labour warranty of 2 years.