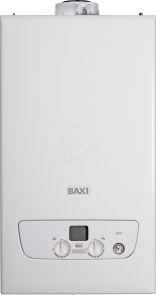 We scored this Baxi 600 615 System boiler at 85.78% on our internal benchmarking system. To determine a score, we take into consideration a number of different factors including the boiler's energy efficiency, installed price, likely running costs, and the length of the manufacturer's warranty.

Fitted by an experienced Gas Safe PlumbProud engineer, the cost for this Baxi 600 615 System boiler will be in the region of £1,900 on a standard, non-complicated installation.

Get a free, no-obligation Baxi 600 615 boiler quote today by simply entering your postcode in the box on this page. You can also speak to a boiler installation expert about heating for your home by getting in touch via email or by phone on 01604 343053.

The Baxi 600 615 boiler is an option you may wish to consider if you're looking for a system boiler for your house or flat.

System boilers require a hot water cylinder to work (normally stored in an airing or landing cupboard) but, unlike heat only boilers, they do not require a cold water tank. This makes them more suitable for homes that do not have lofts, where attic space is limited or where a loft conversion is being considered.

You program your heating and hot water to come on via the control panel. But if you forget to set the timer, you will have to wait a while for the water to heat up. Hot water is stored in the cylinder for use throughout the day and can be distributed to multiple showers and taps at the same time without a loss of pressure or temperature (something combi boilers really struggle with). For this reason, a system boiler is a suitable option for large families and homes with more than one bathroom.

As no cold-water tank is needed with a system boiler and many major system components are built into it, this type of boiler can be easier to install than a standard boiler.

The output of the Baxi 600 615 system is 15 kW kilowatts, so which types of property would this be most suitable for?

An experienced heating engineer would say that this Baxi 600 615 System boiler's level of output makes it a suitable installation for smaller homes and apartments with up to 10 radiators and one bathroom.

We recommend that you select a condensing boiler like the Baxi 600 gas Baxi 600 615 for your home if possible because of the environmental benefits and the money you'll save on your gas bills.

How energy efficient is the Baxi 600 615 system boiler?

Would choosing the Baxi 600 615 system help the environment? Let's see what the statistics suggest.

What is the warranty period on a Baxi 600 615 system boiler?

The Baxi 600 615 is covered by a parts and labour warranty of 7 years following installation.

On the PlumbProud quality scoring system, we rate this Baxi 600 615 System boiler 85.78%. To determine our rating, we take lots of different factors into consideration from price installed to manufacturer guarantees, energy efficiency, likely cost of running, and more.

We estimate that this Baxi 600 615 System boiler will cost £1,900 fully installed through PlumbProud provided that the fit is straightforward.

If you would like a free quote and professional advice and guidance to help you decide if the Baxi 600 615 is the right choice for your home, please get in touch. You can do this by entering your postcode in the quote boxes on this page, click here to email us or give us a call on 01604 343053.

The Baxi 600 615 boiler is a system boiler you may wish to consider when looking for a new boiler for your house or flat.

Would the Baxi 600 615 system boiler be suitable for my house or flat?

Most heating engineers would suggest that the Baxi 600 615 system boiler would be a suitable choice for installation in smaller homes and apartments with up to 10 radiators and one bathroom.

The Baxi 600 615 is a condensing gas boiler and choosing this model will result in a likely substantial reduction in your fuel bills, particularly if you're replacing an older, inefficient, non-condensing boiler.

Is the Baxi 600 615 system environmentally friendly?

Would choosing a Baxi 600 615 system help in the fight against climate change? What do the performance statistics suggest?