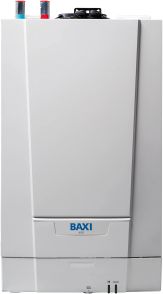 This Baxi 400 418 heat only boiler scores 85.23% on our PlumbProud boiler quality benchmark tests. To determine our rating, we consider many factors, such as the cost of installation, manufacturer guarantees, energy efficiency, and likely running costs.

You should budget around £1,800 for the supply and installation of this Baxi 400 418 heat only boiler by PlumbProud.

To contact us, please enter your postcode in the quote boxes on this page, click here to email us, or give us a call on 01604 343053. We can provide you with a free quote on the Baxi 400 418 boiler and offer professional advice and guidance on whether this Baxi 400 418 heat only boiler is the right choice for your home.

You might want to consider the Baxi 400 418 for your house or flat if you are looking for a heat only boiler.

Is the Baxi 400 418 heat only boiler suitable for my house or apartment?

A PlumbProud Gas Safe engineer would recommend that the most suitable type of property for a Baxi 400 418 heat only would be smaller homes and apartments containing up to 10 radiators and providing hot water for one bathroom.

The Baxi 400 418 is a condensing gas boiler - we’d strongly recommend that you choose the very latest condensing model for your home.

Is the Baxi 400 418 heat only considered environmentally friendly?

Do the figures suggest that installing the Baxi 400 418 heat only at your property would help in the fight against climate change?

Is there a warranty on the Baxi 400 418 heat only boiler if it breaks down?

The parts and labour warranty on the Baxi 400 418 covers all repair-related costs for 5 years while the heat exchange warranty covers you for [Heat Exchange Warranty] years.

Click here for a personalised Baxi 400 418 heat only quote

According to our PlumbProud boiler quality scoring system, we rate this model 85.23%. We rank boilers using a number of different factors including price installed, manufacturer guarantees, energy efficiency, likely running costs, and more.

Provided the proposed installation is straightforward, we would anticipate that this Baxi 400 418 heat only boiler will cost £1,800 fully installed through PlumbProud.

To receive a free quote on the Baxi 400 418 boiler and to receive professional advice and guidance on whether it's the right choice for your home, please enter your postcode in the quote boxes on this page, click here to email us, or call 01604 343053.

If you are searching for a heat only boiler for your house or flat, the Baxi 400 418 is certainly one to consider.

You may hear a heat only boiler described as a standard boiler, a regular boiler, or a conventional boiler but the terms mean the same. Heat only boilers require a hot water cylinder (usually stored in a landing or airing cupboard) and a cold water storage tank (usually stored in the loft) to operate. Your water is kept warm by the hot water cylinder throughout the day.

A heat only boiler lets you schedule the hot water and central heating you want for set times of the day. However, you'll have to wait before having a bath or shower if you forget to set it and there's no hot water left in the tank.

If you have a bigger family or more than one bathroom, a heat only boiler is a better option than a combi boiler in many cases. This is because a combi boiler struggles to maintain water volume, pressure and temperature to multiple points in a home simultaneously.

Would the Baxi 400 418 heat only be a suitable choice of boiler for my house or flat?

An experienced PlumbProud Gas Safe engineer would almost certainly recommend that this Baxi 400 418 heat only boiler would be most suitable for smaller homes and apartments with up to 10 radiators and one bathroom.

Is the Baxi 400 418 heat only boiler environmentally friendly?

Would choosing the Baxi 400 418 heat only boiler be an environmentally friendly decision? Here's what the figures say.

The Baxi 400 418 boiler comes with a parts and labour warranty of 5 years.