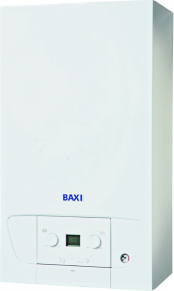 On the PlumbProud quality scoring system, we rate this Baxi 200 224 heat only boiler at 82.52%. To determine a boiler's quality, we consider many different factors from price installed to manufacturer guarantees, energy efficiency, likely cost of running, and more.

On most non-complicated installations, we would expect this Baxi 200 224 heat only boiler to cost £1,800 supplied and fully professionally installed.

To contact us, please enter your postcode in the quote boxes on this page, click here to email us, or give us a call on 01604 343053. We can provide you with a free quote on the Baxi 200 224 boiler and offer professional advice and guidance on whether this Baxi 200 224 heat only boiler is the right choice for your home.

Most Gas Safe boiler installers would likely recommend that, at this level of output, this Baxi 200 224 heat only boiler would be a suitable choice for medium-sized homes and larger apartments with 10-15 radiators and two bathrooms.

Condensing boilers like the Baxi 200 224 improve energy efficiency and reduce your annual expenditure on gas.

Is the Baxi 200 224 heat only rated as environmentally friendly?

Would choosing a Baxi 200 224 heat only help in the fight against climate change? What do the performance statistics suggest?

The Baxi 200 224 boiler comes with a parts and labour warranty of 3 years.

Click here for a personalised Baxi 200 224 heat only quote

We would expect this Baxi 200 224 heat only boiler to cost £1,800 fully installed through PlumbProud, although it will cost more if the fit is complicated. We will provide you with a full quote before starting work, however.

You can speak to our friendly and professional advisors by calling 01604 343053. They can provide you with a free quotation on the Baxi 200 224 boiler and confirm that it is suitable for your home. You can also click here to email us or enter your postcode into the quotation box on this page.

With a heat only boiler, you program your hot water and temperature for set times during the day or week. If you forget to set your boiler or the immersion cylinder runs out of hot water, you may have to wait up to an hour for your supply of hot water to be restored.

A heat only boiler is likely to be the best choice for a home with several bathrooms or a bigger family - the type of household where hot water is in continual demand and more than one person might need it at once. With the more popular combi boiler, there is a maximum amount of water that can be heated and distributed, while pressure, volume and temperature drop if two or more people need hot water at once.

Is a Baxi 200 224 heat only boiler suitable for my house or apartment?

Most Gas Safe boiler installers would likely recommend that, at this level of output, this Baxi 200 224 heat only boiler would be a suitable choice for medium-sized homes and larger apartments with 10-15 radiators and two bathrooms.

Is the Baxi 200 224 heat only environmentally friendly?

Will choosing a Baxi 200 224 heat only boiler for your home be positive for the environment? Let's examine the figures.

The Baxi 200 224 boiler is covered by a parts and labour warranty of 3 years.