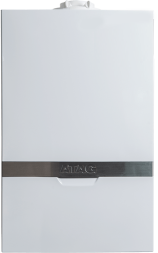 Considering lots of different factors such as price installed, manufacturer guarantees, energy efficiency, and the likely running cost, we’ve given this Atag iR 24 heat only boiler a rating of TBC% using our PlumbProud quality scoring system.

We would anticipate that this Atag iR 24 heat only boiler would cost you £TBC fully installed through PlumbProud provided that the fitting is standard and with no complications.

We recommend that you speak to our friendly advisors by calling 01604 343053 to seek professional advice on whether the Atag IR 24 boiler is right for your home. Our team can also provide you with a free quotation for this Atag iR 24 heat only boiler. Alternatively, click here to email us or enter your postcode into the quotation box on this page.

Looking for a gas heat only boiler for your house or flat? If you are, the Atag IR 24 boiler may be worth considering.

You control how your heat only boiler works by programming it to heat water and provide central heating at the times and on the dates you choose. But if you forget to set times and dates and your hot water cylinder is empty, you may have to wait up to an hour before you have hot water again in your home.

Heat only boilers are often the best choice for a larger family or a property with multiple bathrooms as, unlike with combi boilers, there is no drop in water pressure, temperature or volume when more than one person wants hot water.

Is a Atag IR 24 heat only the right boiler for my house or flat?

The output of the Atag IR 24 heat only is 23 kW kilowatts, so which types of property would this be appropriate for?

A PlumbProud Gas Safe boiler installer would recommend that the level of output from this Atag iR 24 heat only boiler would make it a suitable installation option for medium-sized homes and larger apartments with 10-15 radiators and two bathrooms.


What are the dimensions of the Atag IR 24 boiler?

Is the Atag IR 24 non-condensing or condensing?

Condensing gas boilers like the Atag IR 24 are environmentally friendlier and cheaper to run so, if possible, we strongly recommend that you choose this or one of the very latest models.

Does the Atag IR 24 heat only protect the environment?

Do the figures suggest that installing the Atag IR 24 heat only at your property would help in the fight against climate change?

Following testing, the Atag IR 24 was given a 94% energy efficiency rating and a SEDBUK grading of "A".

Does the Atag IR 24 heat only boiler come with a warranty?

The Atag IR 24 boiler is provided with a parts and labour warranty lasting 14 years.

Click here for a personalised Atag iR 24 heat only quote

Our PlumbProud quality scoring system uses many different factors, such as price installed, manufacturer guarantees, energy efficiency and the likely cost of running, among others, to determine a boiler's value for money rating. This Atag iR 24 heat only boiler scores TBC%.

This Atag iR 24 heat only boiler will cost around £TBC fitted through PlumbProud where there are no complications during the installation.

To get a free quote for the installation of the Atag IR 24 boiler in your home, simply enter your postcode in the box provided on this page. You can also find out whether this is the right boiler for your home by clicking to email our installation team or by calling us on 01604 343053.

The Atag IR 24 may be worth considering if you are looking for a heat only boiler for your house or flat.

When you program a heat only boiler, you set the times and days when you want central heating and hot water to be available. However, if you don't remember to program your boiler and there's no water left in the hot water cylinder, you may have to wait up to an hour for hot water to come out of your taps.

Heat only boilers can cope with the demand for hot water from multiple taps and sources around your home simultaneously. That's why they're better for larger homes than combi boilers - combi boilers struggle when more than one hot tap is turned on. This is because they have a maximum capacity of water they can heat and distribute at any one time, meaning water pressure, temperature and volume to each tap drops.

Is the Atag IR 24 heat only boiler from the IR range a suitable choice for my house or flat?

The output of the Atag IR 24 heat only is 23 kW, so which types of property would this Atag iR 24 heat only boiler be appropriate for?

A boiler engineer would be likely to recommend that this Atag iR 24 heat only boiler is capable of providing heating and hot water to 10-15 radiators and two bathrooms and would therefore be most suitable for medium-sized homes and larger apartments.

How energy efficient is the Atag IR 24 heat only?

Do the available figures suggest that installing the Atag IR 24 heat only in your property would be an environmentally friendly choice?

The Atag IR 24 was awarded an efficiency rating of 94% with a SEDBUK band rating of "A".

How many years' warranty does the Atag IR 24 heat only come with?

The Atag IR 24 boiler offers a parts and labour warranty of 14 years.