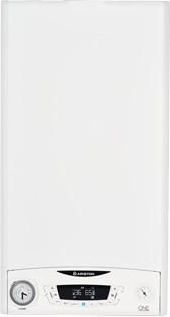 In our PlumbProud quality testing, this Ariston E-COMBI ONE 24 Combi boiler scores 79.85%. We determine our rating based on a number of different factors including installation costs, manufacturer guarantees, energy efficiency, and operating costs.

Wondering if the Ariston E-COMBI ONE 24 is the right boiler for your home? Then speak to a professional here by getting in touch via email or call us on 01604 343053. You can also get a free quote by entering your postcode in the box on the page.

What type of boiler is the Ariston E-COMBI ONE 24?

You might want to consider the Ariston E-COMBI ONE 24 for your house or flat if you are looking for a combi boiler.

Is the Ariston E-COMBI ONE 24 combi boiler from the E-COMBI ONE range a suitable choice for my house or flat?

Please remember to consider "flow rates" as well when choosing your new boiler. All combi boilers including the Ariston E-COMBI ONE 24 draw water from the mains.

Each combi boiler has its own flow rate (measured in litres per minute) - this tells you how much water it can heat and distribute to your home’s taps and radiators straight from the mains. This Ariston E-COMBI ONE 24 Combi boiler's flow rate is 12 L/m.


What size is the Ariston E-COMBI ONE 24 boiler?

The dimensions of the Ariston E-COMBI ONE 24 are TBC mm tall, TBC mm wide, and TBC mm deep.

Is the Ariston E-COMBI ONE 24 condensing or non-condensing?

The Ariston E-COMBI ONE 24 boiler is a condensing gas boiler and we recommend that you select one of the latest models if possible.

Is the combi Ariston E-COMBI ONE 24 boiler energy efficient?

Will installing a Ariston E-COMBI ONE 24 combi be a positive contribution to the environment? Let's see what the experts say.

The energy efficiency of the Ariston E-COMBI ONE 24 was rated at 94% with a SEDBUK grading of "A".

What warranty do I get if I purchase the Ariston E-COMBI ONE 24 boiler?

A parts and labour warranty of 2 years is included with the Ariston Ariston E-COMBI ONE 24 boiler.

Using factors such as price installed, manufacturer guarantees, energy efficiency and the likely cost of running, among others, this model has been rated as scoring 79.85% on the PlumbProud boiler benchmarking system.

Which category of boiler does the Ariston E-COMBI ONE 24 fit into?

If you are searching for a combi boiler for your house or flat, the Ariston E-COMBI ONE 24 is certainly one to consider.

Is a Ariston E-COMBI ONE 24 combi boiler suitable for my apartment or house?

The Ariston E-COMBI ONE 24 combi boiler has an output rate of 22 kW, so which types of property would this be suitable for?

A PlumbProud heating engineer would recommend that this Ariston E-COMBI ONE 24 Combi boiler is suitable for smaller homes and apartments with up to 10 radiators and one bathroom.


The size of the Ariston E-COMBI ONE 24 in millimetres

Is the Ariston E-COMBI ONE 24 non-condensing or condensing?

The Ariston E-COMBI ONE 24 is a condensing gas boiler - we’d strongly recommend that you choose the very latest condensing model for your home.

How energy efficient is the Ariston E-COMBI ONE 24 combi?

Will installing a Ariston E-COMBI ONE 24 combi in your home be a positive contribution to the environment? The figures below will tell you more.

The Ariston E-COMBI ONE 24 has been assigned an efficiency rating of 94% with a SEDBUK rating of "A".

The ERP rating for the Ariston E-COMBI ONE 24 is "A" for heat and "A" for hot water production.

How long is the warranty period on the Ariston E-COMBI ONE 24 combi boiler?

The Ariston E-COMBI ONE 24 is supplied with a parts and labour warranty of 2 years.