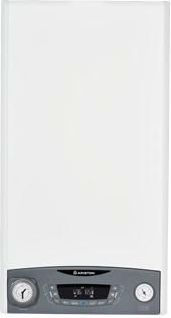 Assessing factors including the system's running costs, its energy efficiency, the manufacturer’s guarantee, and its likely installed price, we scored this Ariston CLAS ONE 24 Combi boiler 81.82% on our internal PlumbProud grading system.

This Ariston CLAS ONE 24 Combi boiler will cost approximately £1,800 supplied and fully installed through PlumbProud assuming that there are no unexpected complications during the fitting.

Enter your postcode in the box provided and receive a free quote for the Ariston CLAS ONE 24 boiler for your home. We are also happy to answer any questions you might have about any of our boilers. You can do this by emailing the team or calling us today on 01604 343053.

Is the Ariston CLAS ONE 24 a combi, system or regular boiler?

The Ariston CLAS ONE 24 boiler could be suitable for your house or flat if you are looking for a new combi boiler.

Is a Ariston CLAS ONE 24 combi boiler suitable for my apartment or house?

Whether this Ariston CLAS ONE 24 Combi boiler is right for where you live depends on its size or "output" level. Size does not mean its physical dimensions - it means how powerful it is.

The output of the Ariston CLAS ONE 24 combi boiler is 22 kW, so which types of property would this be appropriate for?

Most experienced heating engineers would likely recommend that, at this level of output, this Ariston CLAS ONE 24 Combi boiler would be a suitable choice for smaller homes and apartments with up to 10 radiators and one bathroom.

The speed at which it can do this is called the "flow rate", which is measured in litres per minute. If you have a lot of radiators and bathrooms in your home and multiple people are regularly trying to use the hot water at one time, such as in the morning or evening, you'll need a combi with a high flow rate. This Ariston CLAS ONE 24 Combi boiler's flow rate is 12 L/m.


What dimensions does a Ariston CLAS ONE 24 have?

Is the Ariston CLAS ONE 24 non-condensing or condensing?

We recommend that you select a condensing boiler like the Ariston CLAS ONE gas Ariston CLAS ONE 24 for your home if possible because of the environmental benefits and the money you'll save on your gas bills.

Is the Ariston CLAS ONE 24 combi boiler an environmentally friendly choice?

Will installing a Ariston CLAS ONE 24 combi be a positive contribution to the environment? Let's see what the experts say.

The Ariston CLAS ONE 24 scored an efficiency rating of 90% and a SEDBUK band rating of A.

The ERP rating of the Ariston CLAS ONE 24 is "A" for heat and "A" for hot water.

What warranty does the Ariston CLAS ONE 24 combi boiler come with?

The Ariston CLAS ONE 24 is covered by a parts and labour warranty of 8 years following installation.

Click here for a personalised Ariston CLAS ONE 24 Combi quote

Assessing factors including the system's running costs, its energy efficiency, the manufacturer’s guarantee, and its likely installed price, we scored this Ariston CLAS ONE 24 Combi boiler 81.82% on our internal PlumbProud grading system.

We would expect that, unless there are complications during fitting, this Ariston CLAS ONE 24 Combi boiler would cost £1,800 supplied and professionally installed through PlumbProud.

To get a free quote for the installation of the Ariston CLAS ONE 24 boiler in your home, simply enter your postcode in the box provided on this page. You can also find out whether this is the right boiler for your home by clicking to email our installation team or by calling us on 01604 343053.

Suitable for a house or a flat, the Ariston CLAS ONE 24 combi boiler is worth considering if you want a combi boiler.

Would the Ariston CLAS ONE 24 combi boiler be suitable for my house or flat?

The output of the Ariston CLAS ONE 24 combi is 22 kW kilowatts, so which types of property would this be most suitable for?

Most experienced boiler engineers would recommend this Ariston CLAS ONE 24 Combi boiler as a suitable option for smaller homes and apartments with no more than up to 10 radiators and one bathroom.

Ariston CLAS ONE 24 – condensing or non-condensing?

Condensing boilers like the Ariston CLAS ONE 24 improve energy efficiency and reduce your annual expenditure on gas.

Is the Ariston CLAS ONE 24 combi an energy-efficient boiler?

Is the Ariston CLAS ONE 24 combi boiler an environmentally friendly choice for your home? Here’s what the figures say.

Following testing, the Ariston CLAS ONE 24 was given a 90% energy efficiency rating and a SEDBUK grading of "A".

The Ariston CLAS ONE 24 has been awarded an ERP rating of "A" for heat and "A" for water.

Am I covered if my Ariston CLAS ONE 24 combi boiler breaks down?

The parts and labour warranty on the Ariston CLAS ONE 24 lasts for 8 years.