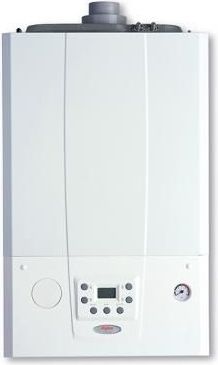 This Alpha EVOKE 33 Combi boiler has been rated at 85.54%. Our PlumbProud boiler quality rating system uses price installed, energy efficiency, likely running costs, the manufacturer's warranty and other factors to determine the rating we give.

Expect this Alpha EVOKE 33 Combi boiler to cost you £1,700 fully installed where there are no complications on the fit if you choose PlumbProud for this installation.

Enter your postcode in the box provided and receive a free quote for the Alpha EVOKE 33 boiler for your home. We are also happy to answer any questions you might have about any of our boilers. You can do this by emailing the team or calling us today on 01604 343053.

The Alpha EVOKE 33 is a gas combi boiler.

Should I install a Alpha EVOKE 33 combi boiler in my home?

A Gas Safe boiler installer would say that this Alpha EVOKE 33 Combi boiler's level of output makes it suitable for installing in medium-sized homes and larger apartments with 10-15 radiators and two bathrooms.

Is the Alpha EVOKE 33 a condensing or non-condensing boiler?

We recommend the Alpha EVOKE 33 as it is a modern condensing gas boiler from a trusted manufacturer with a reputation for supplying highly energy-efficient boilers.

What energy efficiency ratings have been awarded to the Alpha EVOKE 33 combi?

Would the environmental impact of installing a Alpha EVOKE 33 combi in your home be positive? Let's look at the numbers.

After its assessment, the Alpha EVOKE 33 was given an efficiency rating of 93% and a SEDBUK grading of "A".

How long is the warranty period on the Alpha EVOKE 33 combi boiler?

The Alpha EVOKE 33 boiler is covered by a parts and labour warranty of 7 years.

On the PlumbProud quality scoring system, we rate this Alpha EVOKE 33 Combi boiler at 85.54%. To determine a boiler's quality, we consider many different factors from price installed to manufacturer guarantees, energy efficiency, likely cost of running, and more.

We would expect that, unless there are complications during fitting, this Alpha EVOKE 33 Combi boiler would cost £1,700 supplied and professionally installed through PlumbProud.

To receive a free quote on the Alpha EVOKE 33 boiler and to receive professional advice and guidance on whether it's the right choice for your home, please enter your postcode in the quote boxes on this page, click here to email us, or call 01604 343053.

What type of boiler is the Alpha EVOKE 33 - regular, system or combi?

The Alpha EVOKE 33 is a gas combi boiler.

Is a Alpha EVOKE 33 combi boiler suitable for my house or apartment?

The output of the Alpha EVOKE 33 combi is 29 kW kilowatts, so which types of property would this be appropriate for?

Most experienced Gas Safe boiler installers would suggest that the Alpha EVOKE 33 combi boiler would be a suitable choice for installation in medium-sized homes and larger apartments with 10-15 radiators and two bathrooms.

In addition to output rates, you need to consider a combi boiler's flow rate when making your choice.

The flow rate of your boiler dictates the maximum volume of water (measured in litres per minute) that it can heat and distribute to your taps, showers and radiators at any one time.

However, a combi boiler like the Alpha EVOKE 33 can only heat and deliver water at the rate at which it actually enters your property. For this reason, you should also find out what the mains pressure to your house is before purchasing a boiler.

It's pointless spending more money on a boiler with a 17l/m flow rate if the local water pressure is 11l/m. To give you an indication of average water demand, a power shower typically requires 12 litres of water per minute and a basin tap 4-8 litres. This Alpha EVOKE 33 Combi boiler's flow rate is 14 L/m.

Is the Alpha EVOKE 33 non-condensing or condensing?

Condensing gas boilers like the Alpha EVOKE 33 are environmentally friendlier and cheaper to run so, if possible, we strongly recommend that you choose this or one of the very latest models.

Will installing a Alpha EVOKE 33 combi be a positive contribution to the environment? Let's see what the experts say.

Following testing, the Alpha EVOKE 33 was given a 93% energy efficiency rating and a SEDBUK grading of "A".

How long is the warranty period on the Alpha EVOKE 33 combi boiler?

The Alpha EVOKE 33 boiler is covered by a parts and labour warranty of 7 years.